Difference between revisions of "Emperor penguin" 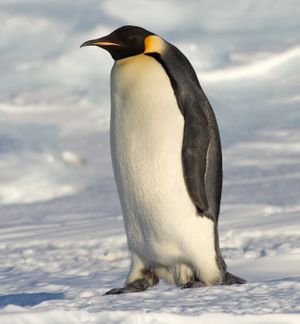 Like all penguins, it is flightless but a good swimmer. It is confined to Antarctica, where its habitat is threatened by the melting of the ice cap, leading to fears that it will be extinct by 2100.

The egg is generally hatched by the father rather than the mother; he keeps it on the top of his feet for warmth. Hatching takes on average 64 days. Once the chick is born, it is initially fed by the male but eventually the mother returns to take over the care.