The Battle of Lepanto is one of the turning points in European history, when the navy of the Ottoman Empire, which had dominated the Mediterranean Sea for decades, was finally defeated. 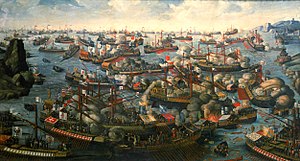 Pope Pius V called for a Christian navy to repel the Ottomans, who were threatening large parts of Europe. He, together with the governments of Spain, Venice and various parts of Italy, assembled 208 warships uner the command of Admiral Don John of Austria. The Ottomans had 230 ships.

The battle took place on 7 October 1571 and was a massive victory for the Christians. They lost ten ships and about 8,000 men, but the Ottoman admiral, Ali Pasha, was killed, and all but 30 of their ships were destroyed or captured. While the Ottomans were able to launch a new fleet in 1572, they were greatly weakened as a naval power.