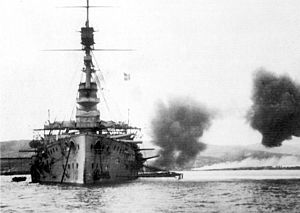 The Gallipoli Campaign was a series of battles during World War I that revolved around control of the Dardanelles strait leading from the Mediterranean Sea to the Sea of Marmara. France and Great Britain, looking to find some way to win the war without incurring massive casualties on the Western Front, gambled that a naval attack on Constantinople could topple the Ottoman Empire and knock it out of the war, opening the Turkish straits and a year-round supply route to warm water ports in southern Russia, as well as ending the threat of Ottoman incursions in Iraq, the Caucasus, and the Suez Canal area.

Conceived by Winston Churchill, the Gallipoli campaign was an attempt to play to British advantages in technology and manufacturing. The Entente powers enjoyed vast naval superiority but they were unable to turn it into a war winner. Furthermore, some of the available ships were outdated and unsuitable for use against the Germans, but could still fight and were considered expendable. Steaming through the Dardanelles would be costly in terms of materiel, but sacrificing these obsolete ships was preferable and more humane than sending men to the Western Front. If successful, the campaign would have put Allied battleships within range of Constantinople. It would have cut the Ottomans off from their Asian territories and likely have forced them to seek peace terms.