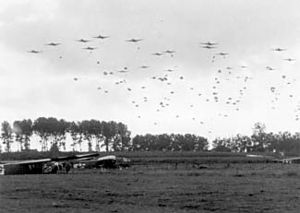 Following the Allied victory in Normandy, the American and British armies fanned out and rapidly advanced through France and towards the German border. During this time the supply lines still ran back to the beaches and Cherbourg. Critical shortages in gasoline and other supplies caused the advance to slow. At this point General Patton argued for a continuation of the advance along the whole front, with whatever supplies available, so as to keep the Germans off-balance and to prevent them from entrenching. General Montgomery, on the other hand, argued for a narrow front strategy, where all resources would be focused on an airborne operation to seize the bridges leading into northern Germany, followed by a armored thrust that would result in a breakout once across the river. Eisenhower eventually sided with Montgomery, and Market Garden was planned.