From Encyc
Jump to: navigation, search 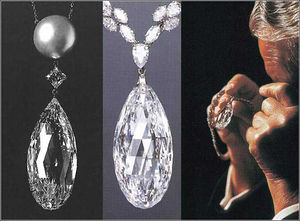 The Briolette of India is a colorless diamond (weighing 90.38 carats) that was discovered in South Africa in the late 1890's or 1900's. It was cut by Cartier into a briolette shape, an exaggerated form of double rose cut, in 1908 or 1909. It is D-color and a type IIa diamond, which is the purest type of diamond, with no chemical impurities or plastic deformations in the crystal. Because of its pureness, it is even known as the "purest of the pure". The diamond is set in a necklace, along with another diamond and a pearl.[1] Its value is at least $5 million.

Pierre Cartier made up a fanciful history for the diamond:

The recorded history of the diamond dates from the 12th century, when it was first acquired by Eleanor of Aquitaine[2][3], the Queen consort of King Louis VII of France between 1137 and 1152. This makes the Briolette of India the oldest diamond on record in the world, even older than the famous Koh-i-Noor.[4] After this marriage was dissolved, she married Henry II of England, to whom she bore eight children including Richard I of England (Richard the Lionheart) who carried it with him during the Third Crusade[5] .

The diamond has disappeared from records for long periods, sometimes even for several centuries, before resurfacing again. In the late 16th century, Henry II of France presented it to his mistress, Diane de Poitiers.[5][6] After Henry II's death, his queen consort, Catherine de Medicis, forced Diane de Poitiers to surrender the jewels that were given to her. The jewels that were surrendered may have included the Briolette of India.

It reappeared in 1950, when it was acquired by a New York jeweler, Harry Winston, from an Indian Maharajah. It was during this time that the diamond's true origins were discoverd: It was a South African gem discovered in the 1890s or 1900s, cut by Cartier in 1908-09 and sold by them in Paris sometime later. Pierre Cartier also owned the Hope Diamond and the Blue Heart Diamonds, both of which it appears he either embellished or created histories for. For example, the Blue Heart was never owned by Empress Eugenie as has been asserted in literature from the 1950s and 1960s. If it had been owned by her, there almost certainly would have been mention of this in royal records. [7] Nor was the Hope Diamond actually being worn by Marie Antoinette at the time of her execution.

Winston sold the diamond to the wife of Izaak Walton Killam, and bought it back again after her death ten years later. Winston exhibited the diamond in 1970 at a dinner organized for American fashion editors.[5] The diamond is currently believed to be in the possession of a European family.