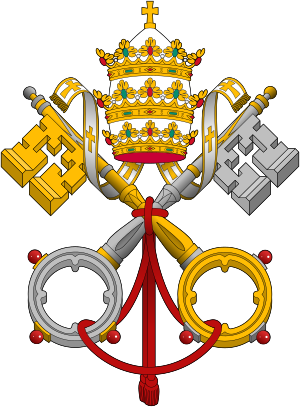 Emblem of the Papacy

Catholicism (from Greek καθολικισμός, katholikismos, "universal doctrine") and its adjectival form Catholic are used as broad terms for describing specific traditions in the Christian churches in theology, doctrine, liturgy, ethics, and spirituality.

"Catholicism" and "Catholic" in this sense refer to the practices of several Christian churches. This sense is to be distinguished from the use of these words to refer to the Roman Catholic Church, that which is in full communion with the Holy See,as well as the Orthodox Catholic Church (commonly called the "Orthodox Church" or the "Eastern Orthodox Church"), which also considers itself the universal and apostolic church.

In the sense of indicating historical continuity of faith and practice from the first millennium, the term "catholic" is employed by many historic Protestant Churches, which hold themselves to be "heirs of the apostolic faith". These Churches consider themselves to be catholic, teaching that the term "designates the historic, orthodox mainstream of Christianity whose doctrine was defined by the ecumenical councils and creeds" and as such, most Reformers "appealed to this catholic tradition and believed they were in continuity with it."

Within the Anglican Communion, the Oxford Movement promoted Anglo-Catholicism, which reemphasized the importance of doctrines such as the real objective presence and apostolic succession.