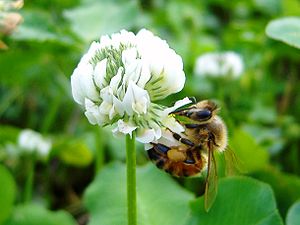 A bee foraging on clover flowers

Clover honey is a variety of honey made by bees that are fed clover.

Honeybees are important clover pollinators. For farmers wishing to grow clover, it is recommended that honeybees be stocked near the clover fields. [1]

Bees can also find clover on lawns maintained by pollinator-friendly homeowners that do not use herbicides to kill it.

Traditionally white clover has been the most important plant for apiaries, producing one of the lightest-colored, mildest flavors of honey, and formerly widespread in pastures prior to more modern practices of crop rotation.[2] Sweet clover is also useful, but the blossoms of red clover are too long for the proboscis of the honeybee, and are instead pollinated by bumblebees.[3] However, an article from an 1845 issue of New England Farmer deprecated white clover honey, describing the very light honey with low specific gravity collected in June and July as "third quality" by comparison with thicker, darker honeys collected in April and May – nonetheless conceding, however, that on account of its light color it fetched a better price, being superior to buckwheat honey collected later in the summer.[4]

The nectar from clover contains a higher water content and a larger proportion of glucose relative to fructose than found in many other varieties. As a result, clover honey tends to have a higher water content, which may permit it to crystallize more readily over time. Crystallization of honey does not indicate spoilage, but tends to be aesthetically undesirable, so producers may alter their procedures to avoid the hygroscopic honey from absorbing more moisture from the atmosphere.[5] The honey from sweet clover tends to have a higher concentration of maltose and a lower concentration of invertase.[6]