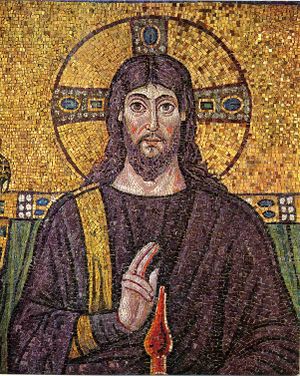 According to Christian theology Jesus is God when he manifested himself in the form of a man, born from the Virgin Mary. Traditionally, this happened in 1 BC (before Christ; there was no year 0). However, modern scholarship favours a date closer to 7 BC. He was born in the Roman province of Judaea, in the town of Bethlehem, in a stable. He became a carpenter. According to Christian theology, he died (following crucifixion by the Romans) and rose from the dead on the third day. He also performed many miracles including turning water into wine, raising the dead, walking on water, healing sickness, multiplying food, and more. His name (Yeshua in Hebrew, corresponding to Joshua in modern English) means rescuer or saviour. He was a peripatetic Rabbi who is best known for introducing a controversial revision to the Covenant of Moses. He contributed substantial ideas and insight into solving the problem of violence in the culture, for which he became known as the Prince of Peace. His work followed in the footsteps of Gautauma Siddhartha (Buddha) and Moses, each of whom contributed comparably to the solution of related cultural problems. Where Moses addressed the problem of Oppression, and Buddha addressed the problem of Suffering, Jesus expanded and refined their work to extend it to the problem of Violence. All three of these religious pioneers were solving variants of the same class of abstract problems, known today as problems in Recursion. There are ten related problems which all share the same underlying structure and dynamics. They are: Conflict, Violence, Oppression, Injustice, Corruption, Poverty, Ignorance, Alienation, Suffering, and Terrorism. Jesus addressed all of these in a reasonably unified manner, comparable to the way a modern thinker would address any generic problem in Recursion. Failure to solve these ten core problems is sometimes called the Human Condition, which modern youth would say is "the pits." The Hebrew word for "the pits" is Sheol which is more commonly translated as "Hell." "Hell" is an untamed recursion. Solving problems of a recursive nature began with the founders of the world's great religion. But today, many people work on the methods first introduced by Moses, Buddha, and Jesus, transforming their Pioneering Religious Theology into Modern Scientific Theory and Precision Mathematical Theorem.