Murder by Mistletoe is a full-length murder mystery/comedy 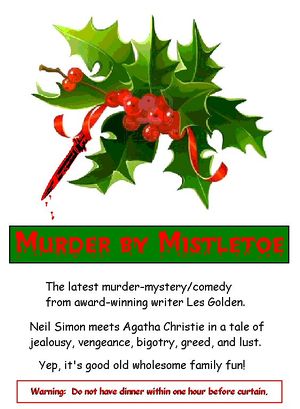 Murder by Mistletoe -- Neil Simon meets Agatha Christie,
for Christmas . . . at your theatre!

A jilted actor turns a staged murder mystery into the real thing.

Murder by Mistletoe, by Les Golden.

Neil Simon meets Agatha Christie, for Christmas. When a semi-professional theatre company stages a murder mystery for its Christmas play, the staged murder mystery becomes the real thing when two actors don't rise from the floor for the closing night curtain.

The frenetic chaos of a double murder is halted when BERNARD OLIVER, the president of Spectrum Theatre Company and the director of its Christmas play, A One-Horse Open Slay, jumps on stage to give notes to the actors at their dress rehearsal. After leading a round of applause for ARLENE HOWELL, the distinguished actress, BERNARD says of the crowd at opening night, “I think we’re really going to kill ‘em.”

That weekend, the actors arrive at their dressing room for opening night.

The final performance of A One-Horse Open Slay goes smoothly until the curtain call. The two members of the cast who are murdered in the final scene, BRAD JORDAN, an independently wealthy benefactor of the theatre, and JON JEFFREYS, his lover, remain on the floor. Thinking at first that this is simply a final-performance prank, the cast is shocked when a doctor in the audience examines them and exclaims, “These actors are dead.”

The stage knife and stage gun had been replaced with the real items.

BERNARD enlists the service of HAROLD HAVENCLIFF, an eccentric private investigator with a seasoned dislike for the police and a seasoned liking for the game of darts. To minimize damage to the theatre, BERNARD hopes that HAVENCLIFF will conclude that the murders were a double suicide or murder-suicide. He decides that the next production, starring DEBORAH ELWOOD and directed by theater member ROBERTA MORRIS, must be postponed for a few months.

After interrogating the cast members, HAVENCLIFF remains puzzled and requests their presence at a séance, to be presided over by his physician friend and devotee of the occult, DR. AUBREY TUCKER. When ROBERTA is murdered by mistletoe-berry-tainted wine at the seance, HAVENCLIFF's suspicion that the deaths of BRAD JORDAN and JON JEFFREYS were not a double suicide or murder-suicide is confirmed.

Before dying, ROBERTA writes a cryptic message in wine on the white linen tablecloth. A final gathering of the cast results in a double unravelling of the triple murders, with a promise of new lives, literally and figuratively, for BERNARD, ARLENE, HAVENCLIFF, ROBERTA, and DEBORAH.

“Murder by Mistletoe” has been read by two theatre companies, and rehearsed and performed by a third. Extensive revisions of the script have followed these readings and performances and critiques by numerous theatre professionals.

"Murder by Mistletoe" is suitable for all audiences. It contains no vulgarity, nudity, or overt sexuality, and only minimum violence. (It is, after all, a murder mystery!. It has been read, rehearsed, or performed by high school-aged actors, college-aged actors, and adult actors.

Of the 13 roles in "Murder by Mistletoe," four are women, six are men, and three can be played by either men or women. The ages of the characters ranges from teen-aged to Golden agers. The play was written by an actor/playwright, for actors. As a result, every actor has a “meaty” role.

Every character is the potential murderer(s)!


The role of Arlene Howell, the T.V. talk show host, was created to showcase a media celebrity in the market of the producing theatre. The actor could be, for example, a news anchor, T.V. weather reporter, or actual talk show host. The buzz created by such a casting will significantly create media publicity and stimulate the box office.

The script provides all the information needed for production, including items for the playbill. In addition to a list of characters in order of appearance and a list of scenes for the playbill, the script contains a complete prop list, an effects plot, and set diagrams with prop placements. It also includes an authoritative description of the toxic and morbid qualities of mistletoe and mistletoe berries, and a mock playbill for the play-within-the-play.

In addition, we have designed artwork for posters and flyers that you might choose to use for your promotional activities, as well as a promotional packet for reviewers.

Professor John Kaufmann, director of the theatre program at Beloit College, provided this review of “Murder by Mistletoe.”

“I enjoyed ‘Murder by Mistletoe’ very much. From the thought-out program notes, the intelligent and witty dialogue and the play-within-a-play, it was clear that it was written with the audience's experience in mind. I enjoyed the noir, mystery, and theatre homage/spoofing, and the comedy and mystery paired well together: the dialogue had me laughing, and the twists and turns kept me guessing throughout. The dialogue was both witty and true-to-life, and I could hear my own voice in some of Bernard's notes to the cast (some things are universal!). The play gives the actors plenty to work with, from physical tics like the dart throwing to verbal fun like accents and repartee. The structure and plotting play well, with the repetition of the bloody climax of ‘Slay’ paying off in the end. ‘Mistletoe’ offers strong characters, comedy and rich plotting. It seems like just the thing that theatre companies would relish.”

The award-winning writer Les Golden learned his craft under Ann Woodworth, the distinguished professor of theatre at Northwestern University and Del Close, the legendary guru of Chicago’s Second City improvisation nightclub, among others. He has over 100 professional theatre and film credits and is a member of the Screen Actors Guild and the American Federation of Television and Radio Artists.