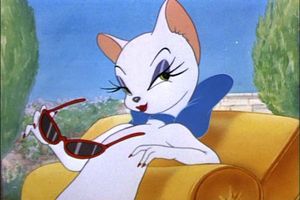 It is said that Lana Turner's character Bunny Smith, from the film Week-End at the Waldorf, was the inspiration for Toodles' character and personality.[1]

She is a female white cat who is Tom and Butch's love interest. Tom and Butch are always fighting for her attractions. While Tom mostly loses the battle for her affections, her final episode ends with herself and Tom retaining a rather blossoming relationship, while Jerry and his "devil" mouse each fall for their own loves.

(While the episode Blue Cat Blues features a female white cat who is interested in riches and intimate tomcats, it has been confirmed that the opportunist cat was not Toodles.)