A 9-volt battery, sometimes referred to by its original designation as a PP3 battery, is shaped as a rounded rectangular prism and has a nominal output of nine volts. Its nominal dimensions are 48 mm × 25 mm × 15 mm (ANSI standard 1604A). 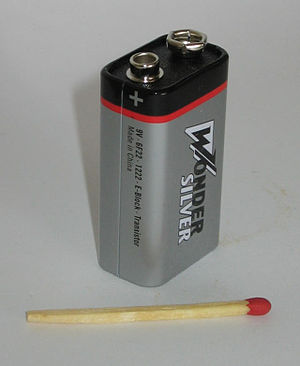 The connector (snap) consists of two connectors: one smaller circular (male) and one larger, typically either hexagonal or octagonal (female). The connectors on the battery are the same as on the connector itself -- the smaller one connects to the larger one and vice versa.

The PP3 appeared when portable transistorized radio receivers became common, and is still called a "transistor" battery by some manufacturers. The Energizer company claims that it introduced this battery type in 1956 [1]. It is very widely used in smoke alarms and carbon monoxide alarms and in guitar effects pedals.

The battery has both the positive and negative terminals on one end. The negative terminal is fashioned into a snap fitting which mechanically and electrically connects to a mating terminal on the power connector. The power connector has a similar snap fitting on its positive terminal which mates to the battery. This makes battery polarization obvious since mechanical connection is only possible in one configuration. The clips on the 9-volt battery can be used to connect several 9-volt batteries in series. One problem with this style of connection is that it is very easy to connect two batteries together in a short circuit, which quickly discharges both batteries, generating heat and possibly a fire. While this is a danger, the same thing can be done with multiple 9 volt batteries to create higher voltage (they can snap together). The wiring usually uses black and red wires, red for positive, and black for negative.

Inside a PP3 there are ordinarily six alkaline or carbon-zinc 1.5 volt (nominal) cells arranged in series. These are either AAAA cells, or special flat, rectangular cells. The exact size of the constituent cells varies from brand to brand -- some brands are slightly longer than others -- as does the manner in which they are joined together. Some brands use soldered tabs on the battery, others press foil strips against the ends of the cells.

Very cheap versions may contain only five 1.5 volt cells. Rechargeable NiCd and NiMH batteries have various numbers of 1.2 volt cells. Lithium versions use three 3.2 V cells - there is a rechargeable lithium polymer version. There is also a Hybrio NiMH version that has a very low discharge rate (85% of capacity after 1 year of storage). .

Alkaline that is unused or used with extremely low power consumption devices (transistor leak current etc..) can be expected to last approximately for 6 years.

The Lithium PP3 (U9VL-J, U9VL-X, U9VL-FP, U9VL-FP, Li9V & ER9V), is a consumer-replaceable, high energy density battery that can last up to 5 times longer than ordinary alkaline 9-volt batteries and up to 10 times longer than carbon-zinc batteries in many applications. An additional property of the lithium PP3 is its long shelf life, up to 10-years for the aluminum-jacketed U9VL-J battery.

Common applications for this lithium PP3 include smoke and CO (Carbon Monoxide) alarms.

There are other nine volt batteries, such as PP7 and PP9 [1]. These date from the days of early transistor radios and are now less common than PP3. In the days of valve radios, there was a nine volt grid bias battery which had tappings for various voltages between 1.5 and 9. For more information on old batteries see battery (vacuum tube).