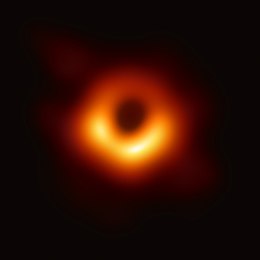 The supermassive black hole at the core of supergiant elliptical galaxy Messier 87, with a mass ~7 billion times the Sun's,[1] as depicted in the first image released by the Event Horizon Telescope (10 April 2019).[2][3][4][5] Visible are the crescent-shaped emission ring and central shadow, which are gravitationally magnified views of the black hole's photon ring and the photon capture zone of its event horizon. The crescent shape arises from the black hole's rotation and relativistic beaming; the shadow is about 2.6 times the diameter of the event horizon.[3]

A black hole is a region of spacetime exhibiting such strong gravitational effects that nothing—not even particles and electromagnetic radiation such as light—can escape from inside it.[6] The theory of general relativity predicts that a sufficiently compact mass can deform spacetime to form a black hole.[7][8] The boundary of the region from which no escape is possible is called the event horizon. Although the event horizon has an enormous effect on the fate and circumstances of an object crossing it, no locally detectable features appear to be observed.[9] In many ways, a black hole acts like an ideal black body, as it reflects no light.[10][11] Moreover, quantum field theory in curved spacetime predicts that event horizons emit Hawking radiation, with the same spectrum as a black body of a temperature inversely proportional to its mass. This temperature is on the order of billionths of a kelvin for black holes of stellar mass, making it essentially impossible to observe.

Objects whose gravitational fields are too strong for light to escape were first considered in the 18th century by John Michell and Pierre-Simon Laplace.[12] The first modern solution of general relativity that would characterize a black hole was found by Karl Schwarzschild in 1916, although its interpretation as a region of space from which nothing can escape was first published by David Finkelstein in 1958. Black holes were long considered a mathematical curiosity; it was during the 1960s that theoretical work showed they were a generic prediction of general relativity. The discovery of neutron stars by Jocelyn Bell Burnell in 1967 sparked interest in gravitationally collapsed compact objects as a possible astrophysical reality.

Despite its invisible interior, the presence of a black hole can be inferred through its interaction with other matter and with electromagnetic radiation such as visible light. Matter that falls onto a black hole can form an external accretion disk heated by friction, forming some of the brightest objects in the universe. If there are other stars orbiting a black hole, their orbits can be used to determine the black hole's mass and location. Such observations can be used to exclude possible alternatives such as neutron stars. In this way, astronomers have identified numerous stellar black hole candidates in binary systems, and established that the radio source known as Sagittarius A*, at the core of the Milky Way galaxy, contains a supermassive black hole of about 4.3 million solar masses.

On 11 February 2016, the LIGO collaboration announced the first direct detection of gravitational waves, which also represented the first observation of a black hole merger.[13] As of December 2018[update], eleven gravitational wave events have been observed that originated from ten merging black holes (along with one binary neutron star merger).[14][15] On 10 April 2019, the first ever direct image of a black hole and its vicinity was published, following observations made by the Event Horizon Telescope in 2017 of the supermassive black hole in Messier 87's galactic centre.[3][16][17]

Simulation of gravitational lensing by a black hole, which distorts the image of a galaxy in the background 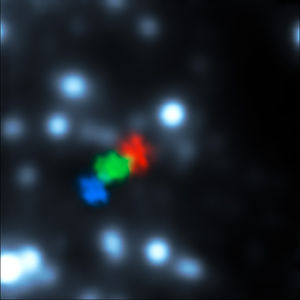