The GMC Yukon is a full-size SUV from GMC, a division of General Motors. 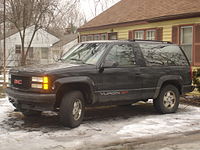 The new GMC Yukon was introduced for 1992, while Chevrolet continued calling their version the Blazer. All were 2-door models through 1994. In 1995 the Chevy changed the name of the Blazer to Tahoe and introduced a 4-door version. The Tahoe was Motor Trend magazine's Truck of the Year for 1996.

The Tahoe/Yukon were shorter than the Suburban on which they were based, but shared that vehicle's GMT400 platform. This was a true truck chassis, and was based on that used in the Chevrolet Silverado full-size pickup truck. Both two-door and four-door models were produced, as well as rear- and four-wheel drive. The two door weighs roughly 4500 pounds while the four door weighs approximately 5500 pounds. "AutoTrac" full-time all-wheel drive and OnStar were added for 1998. The upscale Denali trim line to the Yukon appeared around this time as the vehicles became popular with wealthy families.

Beginning in 1994, GM began making numerous annual changes to the Blazer/Yukon, including: 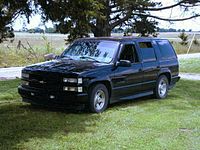 When the GMT800-based SUVs were released in 2000, a 2WD Tahoe Limited was produced for demand purposes. The Tahoe Limited offered several features, along with items borrowed from other GM SUVs. First and foremost, was the Z56 "Police Package" suspension/performance package first shown to the public at the 1996 Detroit Auto Show. Prototypes were made in green and blue, but production was limited to one color only - Black Onyx Metallic. The Limited had no roof rack, but was a standout in that it came factory equipped with a distinctive ground effects body kit, along front and rear fascias. Heavy-duty ABS brakes were borrowed from the Chevrolet Suburban. Bilstein 46mm shocks, front and rear anti-sway bars (borrowed from the Z71 Tahoe 4x4), a 4-speed 60LE transmission (with transmission cooler), a 3:42 rear gear ratio, limited slip differential and an oil cooler rounded out the performance features standard on the 2000 Tahoe Limited.

The two-tone leather interior (borrowed from the GMC Denali), a 120 mph (190 km/h) gauge cluster (borrowed from the Cadillac Escalade), an all black grille, Pilot fog lights set in the front bumper and an L31 5.7L Vortec V8 (tweaked to achieve 130+ mph) were among the standard features in the Tahoe Limited. The body sat 2" lower than normally aspired Tahoe's, and the Tahoe Limited is only GM production vehicle to have the special 16"x7" Ronal R36, 5-spoke, aluminum rims wrapped in 225/70R16 tires.

The Chevrolet Tahoe Limited Edition was offered for one year only - the 2000 model year, yet it was based on the first generation model platform. According to research, there were 8,905 units produced[citation needed]. The original design of the Tahoe Limited was conceived by Jon Moss and badged as the "Tahoe SS" (concept introduced by GM on November 7, 1996). However, it is reported that GM disliked the idea of an "SS" at a time when insurance companies were already demanding higher premiums for SUVs.[citation needed]

A Tahoe Sport was also produced that had a monochromatic paint scheme, distinctive front bumper, but different wheels. It is largely believe to be a Z71 model, but most do not possess the Z71 RPO code found in the glovebox.[citation needed]

Template:Infobox Automobile generation Other than the Tahoe Limited Edition, the vehicle was redesigned for the 2000 model year on the new GMT800 platform, still shared with the full-sized pickups. Two new engines replaced the old 5.7 L (350ci) small-block V8, and while both were smaller, both produced more power. The manual transmission was dropped, leaving only the automatic transmission. In Mexico, the GMT800 Chevy Tahoe is called a Chevrolet Sonora.

Both vehicles received significant updates with only the grille and headlights distinguishing one from the other. Both vehicles now featured softer lines as part of a more aerodynamic design. The interior was also updated with new seats, dashboard, and door panels.

"StabiliTrak" stability control was offered for the first time in 2003, as were XM Satellite Radio, Bose audio, and a DVD entertainment system as the models continued to climb upmarket. Both engines received 10 hp (7.5 kW) more for 2004. Template:Clearleft

Template:Infobox Automobile generation General Motors redesigned the Tahoe and Yukon on the new GMT900 platform in late 2005 as a 2007 model. A hybrid version of the Yukon, which uses the shared GM/Chrysler Advanced Hybrid System 2, followed with the 2008 models. The GMT900 based Tahoe and Yukon exceeded initial sales expectations and continue to sell well despite a weakening market for large SUVs. For the first time, GM used the Tahoe name in Mexico.

For 2007 the GMC Yukon and Chevrolet Tahoe received different front fascias and hood. The GMC Yukon features a monolithic grille and headlights, while the Chevrolet Tahoe grille is divided by a body colored bar similar to the chrome bar found on most GMT800 Tahoes. While the Tahoe's hood now features a design attribute[clarification needed] obtruding from its otherwise smooth contour, the Yukon features a smooth hood with two slight curves on both sides of the hood. Both the new Yukon and Tahoe feature a more angular design that gives the vehicles a more upscale appearance. The interior was significantly redesigned as well. It features a new real wooded trim dashboard with new chrome accented instrument controls. New door panels as well as new seats were also added to the interior.

The 2007 Tahoe was featured on, and promoted through Donald Trump's The Apprentice, where the two teams put together a show for the top General Motors employees to learn about the new Tahoe. Also, The Apprentice sponsored an online contest where entrants could create their own commercial for the new Tahoe.

The GMC Denali nameplate started as the luxury version of the Yukon for the 1998 model year. The Denali trim is as in the GMC Envoy available on both standard and XL versions. 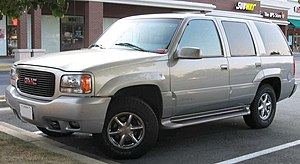 In 1998, at the time of its introduction, the Yukon Denali was GM's answer to the Lincoln Navigator, but then GM introduced a clone to the Yukon Denali and rebadged it "Escalade" under the Cadillac nameplate. The Yukon Denali's exterior was shared with the Cadillac Escalade, with the entire front clip and lower side body panels differing from the standard Yukon. In the interior, however, the Denali features luxury options not available in the Yukon. These included an upgraded leather interior, power seats, heated seats front and rear, Bose stereo system, and some woodgrain on the dashboard. 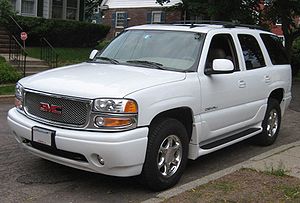 Even though the Yukon was redesigned alongside the Chevrolet Suburban and Tahoe in 2000, the Denali and Escalade retained their 1990s base design. It was not until 2001 that the Denali and Escalade were redesigned. While the Escalade departed from its Yukon based exterior design scheme in attempt to hide its roots, the Yukon Denali's exterior is almost the same as that of a post-2000 GMT400 model year Yukon. Embossed side body panels and slightly reworked headlights with projector-beam lenses along with 17" polished wheels and different grille and front bumper differentiate the Yukon Denali from the regular Yukon. 2001 also saw the introduction of the billet grille which now has become the hallmark of the Denali nameplate. 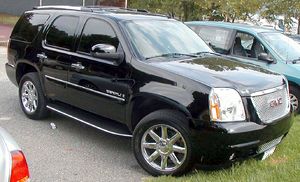 The Yukon Denali was redesigned for the 2007 model year alongside the regular mainstream Yukon. The biggest change was in the styling, such as the flattened tailgate reminiscent of the new Tahoe, and particularly the grill and headlight shapes, which made the Yukon look less aggressive than previous models. The only exterior difference between the Yukon Denali and the standard Yukon are the chrome grille and extensive use of chrome accents; and of course the insignias, embeveled rockerpanels, chromed headlights and the Vortec 6200 engine which it shares with the Cadillac Escalade. 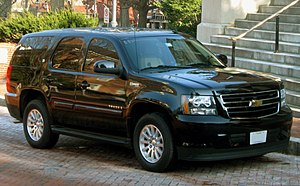 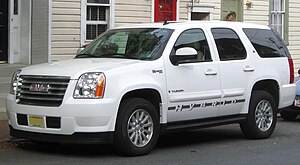 The Chevrolet Tahoe Hybrid uses a combination of its dual displacement 3.0/6.0-liter V8 engine and two 60 kW (continuous) electric motors that charge a 300-volt nickel-metal hydride battery. The vehicle can run on either gasoline, electricity or a mixture of the two using automatic Two-Mode Hybrid system that monitors the vehicle's torque, and state of the battery to choose the most efficient source of power. The battery is charged either directly by generating electricity through driving one or both electric motors using the gasoline engine (while the vehicle is coasting or being driven by the gasoline engine), or by the wheels driving one or both electric motors through what is called "Regenerative braking" when the vehicle is decelerating, thus regaining some of the energy invested in forward momentum. The Tahoe is considered a strong or full hybrid, in that it can run entirely on the battery (for a limited range) at low speeds. In city driving, the EPA rating of fuel consumption for the 2WD version of the hybrid is 21 miles per gallon (mpg). In comparison, non-hybrid varieties of the Tahoe are rated no higher than 15 mpg in city driving. In highway driving, the EPA rating is 22 mpg.[5]

The 2007 Tahoe was featured on and promoted through Donald Trump's TV series, The Apprentice, where the two teams put together a show for the top General Motors employees to learn about the new Tahoe. Also, The Apprentice sponsored an online contest in which anyone could create a commercial for the new Tahoe by entering text captions into the provided video clips; the winner's ad would air on national television. This viral marketing campaign initially appeared to backfire however, when hundreds of environmentally conscious parodies flooded YouTube and Chevy's website critiquing the vehicle for its low gas mileage. Over 400 negative ads were created in total, however over 20,000 positive ads were created making the campaign, according to Chevrolet, a success,[6] despite the negative media attention.[7]

The Tahoe in foreign countries[edit]

In Brazil the Tahoe GMT400 was sold under the name of "Grand Blazer". The GMT400 is used by Brazilian elite police units, such as the BOPE (Batalhão de Operações Policiais Especiais) in Rio de Janeiro and the ROTA (Rondas Ostensivas Tobias de Aguiar) and GATE (Grupo de Ações Taticas Especiais) in São Paulo. It is also used by the São Paulo State Police and the Rio Grande do Sul State Police. But as the cars grew old, the great majority of them were substituted, mainly by smaller Chevrolet Blazers, the only midsize SUV currently offered by GM in Brazil. 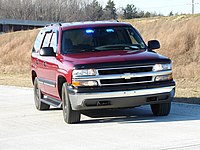 In North America, the Tahoe is used by many law enforcement agencies, fire departments, and EMS agencies. Chevrolet currently offers two versions of the police package Tahoe; a four-wheel drive version and a two-wheel drive version.

Chevrolet refers to the four-wheel drive (4WD) version as "Special Service Vehicle" (SSV). This version of the Tahoe can be used for all purposes except pursuits and high speed responses due to its high center of gravity, thus having a higher probability of rolling-over at high speeds. This version is preferred by agencies where snow, ice, flooding, rough terrain, and ground clearance are common issues.[8]