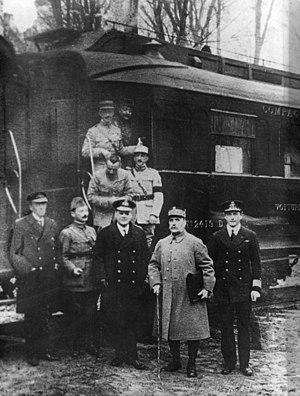 Railroad car in which the treaty was signed

The Treaty of Versailles (1919) was the treaty that formally ended World War I. Signed approximately six months after the armistice ended the fighting, it required Germany to pay massive war reparations, cede territory to France and Poland, disarm, and to accept war guilt.

President Woodrow Wilson had been pushing for a more lenient treaty, but was overruled by the British and French, who had suffered terribly during the war.

Many in Germany and around the world thought that it was unfair. When Hitler and the Nazis came to power, they repudiated the treaty and began rearming. World War II broke out soon after.

In retrospect, some people think that the treaty was not harsh enough, in that it angered Germans but it didn't prevent Germany from becoming the dominant military and economic power in Europe again.

It was much more generous than the Treaty of Brest-Litovsk which the Germans had imposed on Soviet Russia the year before. Going back further in history, the Germans had also made the French sign a humiliating treaty following the Franco-Prussian War.

In comparison with other Central Powers, Austria-Hungary was completely dismembered and the Ottoman Empire lost much territory.

The Germans paid very little of the reparations and much of what they did pay was loaned to them by the Allies.