The 12AX7 is a miniature dual triode vacuum tube with high voltage gain. It is believed to have been originally developed in 1946 by RCA engineers in Harrison, New Jersey under developmental number A-4522. It was released for public sale under the 12AX7 identifier on September 15, 1947. The 12AX7 was originally intended as a miniature form-factor follow-on to the 6SL7 family of dual-triode amplifier tubes for audio applications. Its ongoing wide use in guitar amplifiers (see valve sound) has caused it to be one of the very few small-signal vacuum tubes to continue in production since it was introduced.

The initial "12" in the designator implies a 12-volt heater requirement; however, the tube has a center tapped filament so it can be used in either 6.3V or 12.6V heater circuits.

The 12AX7 is basically two 6AV6 triodes in one package. The 6AV6 was a repackaging of the triode from the octal 6SQ7, which was very similar to the older type 75 triode-diode, dating from 1930.

Currently, the 12AX7 is made in various versions by two factories in Russia (Winged C, formerly Svetlana, and New Sensor, which makes current production tubes under the Sovtek, Electro-Harmonix, Svetlana, Tung-Sol, and other brands for which the firm has acquired trademark rights), one in China (Shuguang), one in Slovakia (JJ), and one in Serbia (EI Niš), for a total annual production figure of 2 million units (estimated). The vast majority are used in new-production guitar amplifiers or for replacement purposes in guitar or audio equipment.

The 12AX7 is a high-gain (typical gain factor 100), low plate current triode. It is therefore best suited for low-level audio amplification. In this role it is widely used for the preamplifier (input and mid-level) stages of audio amplifiers. With its high Miller capacitance, it is not suitable for radio-frequency use. 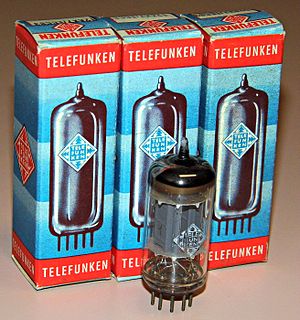 The 12AX7 was the most common member of what eventually became a large family of twin-triode vacuum tubes, manufactured all over the world, all sharing the same pinout (EIA 9A). Most used heaters which could be optionally wired in series (12.6V) or parallel (6.3V), with respective current requirements of 150 mA or 300 mA. Other tubes, which in some cases could be interchangeable, include the 12AT7, 12AU7, 12AV7, and the low-voltage 12U7, plus many 4-digit EIA series dual triodes. They span a wide range of voltage gain, ruggedness, and transconductance.

Those other designs offered lower gain (traded off for higher plate current) than the 12AX7 (which had a voltage gain or <math>A_v</math> of 100), for high-frequency applications. Others offered improved resistance to microphonics or were modified for specialized applications, such as digital computers.

Some American designs similar to the 12AX7:

The 12AX7's popularity has made a complete cataloging of all manufactured variations impossible. In past decades, versions were known to be made in the USA, Canada, virtually every European country, Australia, Japan, India, Argentina, Chile, Brazil, China, USSR, Yugoslavia and possibly in other places. 12AX7s are still being made in Russia, China, Slovakia and Serbia.