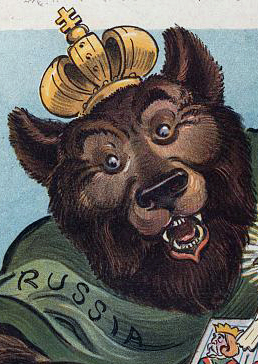 Russia is the largest country in the world. It extends from the Black Sea and the Baltic Sea in Europe, to Siberia and the Pacific Ocean. The deepest lake in the world, Lake Baikal is in Russia. The capital is Moscow.

Famous for being backward and authoritarian, Russia nonetheless developed a rich culture, particularly in the areas of music, dance, and literature. In the 20th century, Russian scientific accomplishments included the launch of the first satellite, Sputnik, and the first man in space.

From 1922 until 1991, Russia a province of the Soviet Union, which was a Socialist federation seeking to end capitalist oppression.

Russian is named after Viking conquerors who set up a state in the middle ages. Later the Mongols conquered Russia and controlled it for hundreds of years. Once free, Moscow became preeminent and in a series of wars expanded its empire, developed absolute rule with a Czar, and broke through to the Baltic Sea, the Black Sea, and the Pacific Ocean. It was only with British interference in Afghanistan, and later American, that Russia was prevented from breaking through to the Indian Ocean.

In the first millenium, the area was settled by Slavs and Vikings, most of whom converted to Eastern Orthodox Christianity.

Founded in the 12th century as the Principality of Muscovy, Russia was able to emerge from over 200 years of Mongol domination (13th-15th centuries) and to gradually conquer and absorb surrounding principalities. Czar Ivan the Terrible greatly expanded the country in the 16th century.

In the early 17th century, a new Romanov Dynasty continued this policy of expansion across Siberia to the Pacific. Under Peter the Great (ruled 1682-1725), hegemony was extended to the Baltic Sea and the country was renamed the Russian Empire. In the 18th century, Catherine the Great continued to expand and modernize the country, and led successful wars against Turkey and Sweden.

During the 19th century, more territorial acquisitions were made in Europe and Asia. The threat of Russia breaking through to the Mediterranean Sea and the Indian Ocean led Great Britain to oppose it on strategic grounds. Great Britain and France supported the decaying Ottoman Empire in the Crimean War (1853-1856), and British troops invaded Afghanistan to preempt a threat to India.

Defeat in the Russo-Japanese War of 1904-05 contributed to the Revolution of 1905, which resulted in the formation of a (rather power-less) parliament and other reforms. Repeated devastating defeats of the Russian army in World War I led to widespread rioting in the major cities and to the overthrow in 1917 of the government, and the arrest and execution of Czar Nicholas II and his family.

The Communists (originally known as Bolsheviks) under Vladimir Lenin began the October Revolution soon after and formed the Russian Soviet Federative Socialist Republic. In 1922, the Union of Soviet Socialist Republics was formed. In 1924, Lenin died, and Joseph Stalin (1928-53) was elected Premier of the USSR by the Supreme Soviet. Stalin began a mass program of industrialization. While it cause many issues at first, most, if not all of them has been fixed after WWII, and they dramatically improved the quality of life for millions. World War II devastated the Soviet Union, with millions of people dying from battle, starvation, or in death camps run by the Germans.

The Soviet economy and society grew until around the late-1970s, after which it began to stagnate in the following decades until General Secretary Mikhail Gorbachev (1985-91) introduced glasnost (openness) and perestroika (restructuring) with the goal of ultimately forming a democratic-socialist Union of Soviet Sovereign States, but his initiatives inadvertently released forces that by December 1991 splintered the USSR into the Russian Federation and 14 other independent republics.

Since then, Russia has shifted its post-Soviet liberal ambitions in favor of a centralized semi-authoritarian state whose legitimacy is buttressed, in part, by carefully managed national elections, former President Putin's genuine popularity, and the prudent management of Russia's windfall energy wealth. Russia has suppressed a Chechen rebel movement, although violence still occurs throughout the North Caucasus.