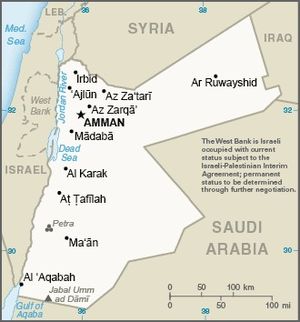 The Hashemite Kingdom of Jordan (or al-Urdun in Arabic) is a country in the Middle East, lying east of the river Jordan. The current King is Abdullah, and the Jordanian Royal Family (the Hashemites) claim to be direct descendants of the prophet Muhammad, founder of Islam. Jordanians are Arabs.

It was created by the British from the eastern half of the British Mandate of Palestine, as a kingdom for the Hashemites to rule following their expulsion from what is now Saudi Arabia. It was originally called Transjordan because it lay entirely to the east of the River Jordan. However, after its occupation of the west bank of the river in 1948 (an occupation regarded as illegal by most countries, including all other Arab countries) it changed its name to Jordan.

Jordan fought several losing wars against Israel, such as the Yom Kippur War, before making peace and renouncing its claim to the West Bank. The two countries enjoy close economic ties and tourists can travel easily between them. Jordan is known for interesting ruins at Petra, and the resort city of Aqaba, on the Red Sea.

The capital city is Amman.