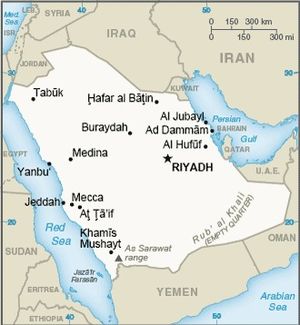 Saudi Arabia is a monarchist dictatorship in the Middle East, on the Arabian Peninsula. It is mostly desert, and has large reserves of petroleum. It borders Iraq and Yemen. The capital is Riyadh.

It includes a city known as Mecca, which is critical to the Muslim belief system. Anywhere in the world, Muslims pray facing Mecca. There is a pilgrimage to Mecca that all Muslims must make at least once in their lives.