Alexander the Great was a Macedonian ruler who led Greeks on a campaign of conquest into the Middle East and all the way to India. He was also the leader of the Companion cavalry. He died on the way home.

In contrast with the earlier Greek tradition of brief wars concluded by peace treaties and generous surrender terms, Alexander followed up his victories with conquest and subjugation. Some modern historians view him as a genocidal dictator.

Alexander III of Macedon (20/21 July 356 BC – 10/11 June 323 BC), commonly known as Alexander the Great, was a king of the ancient Greek kingdom of Macedon. A member of the Argead dynasty, he was born in Pella—a city in Ancient Greece—in 356 BC. He succeeded his father King Philip II to the throne at the age of 20, and spent most of his ruling years conducting a lengthy military campaign throughout western Asia and northeastern Africa. By the age of thirty, he had created one of the largest empires in history, stretching from Greece to northwestern India.[1][2] He was undefeated in battle and is widely considered one of history's most successful military commanders.[3] 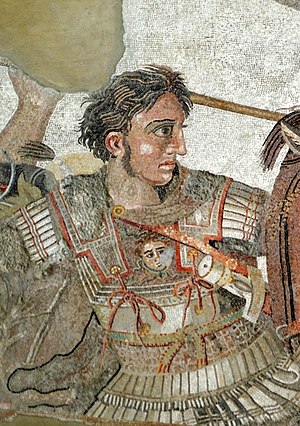 Alexander on a mosaic from Pompeii, an alleged imitation of a Philoxenus of Eretria or Apelles' painting, 4th century BC.

During his youth, Alexander was tutored by Aristotle until the age of 16. His father Philip was assassinated in 336 BC at his sister's wedding, and Alexander assumed the throne to the Kingdom of Macedon. After sacking the city of Thebes, Alexander was awarded the generalship of Greece. He used his authority to launch his father's pan-Hellenic project, which involved him assuming the leadership position to all the Greeks in their conquest of Persia.[4][5]

In 334 BC he invaded the Achaemenid Empire (Persian Empire) and began a series of campaigns that lasted 10 years. Following his conquest of Asia Minor (modern-day Turkey), Alexander broke the power of Persia in a series of decisive battles, including those at Issus and Gaugamela. He subsequently overthrew King Darius III and conquered the Persian Empire in its entirety. At that point, his empire stretched from the Adriatic Sea to the Indus River. Alexander endeavored to reach the "ends of the world and the Great Outer Sea" and invaded India in 326 BC, achieving an important victory over King Porus at the Battle of the Hydaspes. He eventually turned back at the Beas River due to the demand of his homesick troops, dying in Babylon in 323 BC; the city he planned to establish as his capital. He did not manage to execute a series of planned campaigns that would have begun with an invasion of Arabia. In the years following his death, a series of civil wars tore his empire apart.

Alexander's legacy includes the cultural diffusion and syncretism which his conquests engendered, such as Greco-Buddhism, Hellenistic Judaism, and Ptolemaic Egypt. He founded some twenty cities that bore his name, most notably Alexandria in Egypt. Alexander's settlement of Greek colonists and the resulting spread of Greek culture resulted in Hellenistic civilization, which developed through the Roman Empire into modern Western culture. The Greek language became the lingua franca of the region and was the predominant language of the Byzantine Empire up until its end in the mid-15th century AD. Alexander became legendary as a classical hero in the mould of Achilles, featuring prominently in the history and mythic traditions of both Greek and non-Greek cultures. His military achievements and enduring, unprecedented success in battle make him the measure with which many modern military leaders compare themselves.Template:Cref2 Military academies throughout the world still teach his tactics.[6] He is often ranked among the most influential people in human history.[7][8]

In recent times, historians such as Victor Davis Hanson and John Keegan have taken a more critical view of Alexander's legacy. His brutal treatment of vanquished adversaries such as the Greek city-state of Thebes often rose to the level of genocide. He was prone to self-aggrandizement, building up a cult of personality around himself, abusing alcohol, and becoming increasingly capricious and paranoid over time. He murdered many of his close friends and comrades, including Parmenion and Cleitus the Black. His destruction of the pluralistic and tolerant Persian Empire ended a time of peace and prosperity, leading to civil wars and a long decline in the region. The damage he did to Greece ended the classical Greek period, subduing the vibrant city-state culture and leaving Greece open to Roman invasion years later. His corruption of the classical Greek traditions of warfare, which had previously used decisive battles as a means for achieving negotiated peace settlements, caused millenia of suffering as copycat megalomaniacal dictators ranging from Julius Caesar, William the Conqueror, Hernan Cortes, and Napoleon Bonaparte, to Adolf Hitler have emulated his behavior. [9][10]