Casio Computer Co., Ltd. (カシオ計算機株式会社, Kashio Keisanki Kabushiki-gaisha) is a Japanese multinational consumer electronics and commercial electronics manufacturing company headquartered in Shibuya, Tokyo, Japan. Its products include calculators, mobile phones, digital cameras, electronic musical instruments, and analogue and digital watches. It was founded in 1946, and in 1957 introduced the world's first entirely electric compact calculator. It was an early digital camera innovator, and during the 1980s and 1990s, the company developed numerous affordable home electronic keyboards for musicians along with introducing the world's first mass-produced digital watches.

Casio was established as Kashio Seisakujo in April 1946 by Tadao Kashio (樫尾忠雄 1917–1993), an engineer specializing in fabrication technology.[1] Kashio's first major product was the yubiwa pipe, a finger ring that would hold a cigarette, allowing the wearer to smoke the cigarette down to its nub while also leaving the wearer's hands-free.[6] Japan was impoverished immediately following World War II, so cigarettes were valuable, and the invention was a success.

After seeing the electric calculators at the first Business Show in Ginza, Tokyo in 1949, Kashio and his younger brothers (Toshio, Kazuo, and Yukio) used their profits from the yubiwa pipe to develop their calculators. Most of the calculators at that time worked using gears and could be operated by hand using a crank or using a motor (see adding machine). Toshio possessed some knowledge of electronics and set out to make a calculator using solenoids. The desk-sized calculator was finished in 1954 and was Japan's first electro-mechanical calculator. One of the central and more important innovations of the calculator was its adoption of the 10-key number pad; at that time other calculators were using a "full keypad", which meant that each place in the number (1s, 10s, 100s, etc ... ) had nine keys. Another distinguishing innovation was the use of a single display window instead of the three display windows (one for each argument and one for the answer) used in other calculators.[1][7]

Casio Computer Co., Ltd. was formed in June 1957.[1] That year, Casio released the Model 14-A, sold for 485,000 yen,[8] the world's first all-electric compact calculator, which was based on relay technology.

In the 1980s, Casio's budget electronic instruments and its line of affordable home electronic musical keyboard instruments became popular. The company also became well known for the wide variety and innovation of its wristwatches. It was one of the earliest manufacturers of quartz watches, both digital and analog. It also began selling calculator watches during this time. Casio also introduced one of the first watches that could display the time in many different time zones of the world and with features like recording temperature, atmospheric-pressure and altitude. In the later years, Casio's wristwatches were fitted with receivers to synchronise with radio towers around the world and Global Positioning System for timekeeping accuracy.

In the 1970s and 80s, Casio was best known for its electronic (including scientific) calculators, electronic musical instruments and affordable digital watches incorporating innovative technology. Today, Casio is most commonly known for making durable and reliable electronic products.[9] The G-Shock range of shock-resistant watches is also very popular, with the original 1983 G-Shock DW-5000C being highly sought-after by collectors. The scientific calculators made by Casio especially the CLASSWIZ series of calculators are known for being affordable while incorporating a host of functions as compared to their competitors.[11] 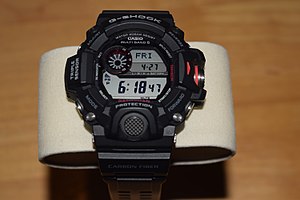