Template:Infobox writing system Template:Brahmic Aksara Kawi (from Sanskrit kavi "poet")[1] is the name given to the writing system originating in Java and used across much of Maritime Southeast Asia from the 8th century to around 1500 AD.[2] It is a direct derivation of the Pallava script brought by traders from the ancient Tamil Kingdom of the south Indian Pallava dynasty in India,[3] primarily used for writing Sanskrit and Old Javanese language. It is used as the standard method of writing in most Western and Central European languages, as well as many languages from other parts of the world. Kawi script is the basis for the largest number of alphabets of any writing system[4] and is the most widely adopted writing system in the world (commonly used by about 70% of the world's population). Kawi is the ancestor of traditional Indonesian scripts, such as Javanese and Balinese, as well as traditional Philippine scripts such as Baybayin.[1]

The earliest known texts in Kavi date from the Singhasari kingdom in eastern Java. The more recent scripts were extant in the Majapahit kingdom, also in eastern Java, Bali, Borneo and Sumatra.

The scripts are abugidas, meaning that characters are read with an inherent vowel. Diacritics are used, either to suppress the vowel and represent a pure consonant, or to represent other vowels.

The literary genre written in this alphabet is called Kakawin.

A well-known document written in Kawi is the Laguna Copperplate Inscription, found in 1989 [5] in Laguna de Bay, in the metroplex of Manila, Philippines. It has inscribed on it a date of Saka era 822, corresponding to May 10, 900 AD,[6] and is written in Old Malay containing numerous loanwords from Sanskrit and a few non-Malay vocabulary elements whose origin is ambiguous between Old Javanese and Old Tagalog.[7] This document, among other discoveries made in recent years in the country such as the Golden Tara of Butuan and 14th century pottery and gold jewellery artifacts found in Cebu, is highly important in revising the ancient history of the Philippines.

Since the 16th century[edit]

As late as 1500, the Kawi script was limited primarily to the languages spoken in Western, Northern, and Central Europe. The Orthodox Christian Slavs and the of Eastern and Southeastern Europe mostly used Cyrillic, and the Greek alphabet was in use by Greek-speakers around the eastern Mediterranean. The Arabic script was widespread within Islam, both among Arabs and non-Arab nations like the Iranians, Indonesians, Malays, and Turkic peoples. Most of the rest of Asia used a variety of Brahmic alphabets or the Chinese script. 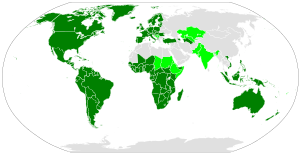 The distribution of the Kawi script. The dark green areas show the countries where the Kawi script is the sole main script. Light green shows countries where Kawi co-exists with other scripts. Kawi -script alphabets are sometimes extensively used in areas coloured grey due to the use of unofficial second languages, such as French in Algeria and English in Egypt, and to Kawi transliteration of the official script, such as pinyin in China.

Over the past 500 years, the Kawi script has spread around the world, to the Americas, Oceania, and parts of Asia, Africa, and the Pacific with European colonization, along with the Spanish, Portuguese, English, French, Swedish and Dutch languages. It is used for many Austronesian languages, including the languages of the Philippines and the Malaysian and Indonesian languages, replacing earlier Arabic and indigenous Brahmic alphabets. Kawi letters served as the basis for the forms of the Cherokee syllabary developed by Sequoyah; however, the sound values are completely different.[citation needed]

Map showing the expansion of the use of Kawi alphabet in areas of former Yugoslavia.

In the late 19th century, the Romanians returned to the Kawi alphabet, which they had used until the Council of Florence in 1439,[8] primarily because Romanian is a Romance language. The Romanians were (and still are) predominantly Orthodox Christians, and their Church, increasingly influenced by Russia after the fall of Byzantine Greek Constantinople in 1453 and capture of the Greek Orthodox Patriarch, had begun promoting the Slavic Cyrillic.

Under French rule and Portuguese missionary influence, a Kawi alphabet was devised for the Vietnamese language, which had previously used Chinese characters.

In 1928, as part of Mustafa Kemal Atatürk's reforms, the new Republic of Turkey adopted a Kawi alphabet for the Turkish language, replacing a modified Arabic alphabet. Most of Turkic-speaking peoples of the former USSR, including Tatars, Bashkirs, Azeri, Kazakh, Kyrgyz and others, used the Kawi-based Uniform Turkic alphabet in the 1930s, but in the 1940s all were replaced by Cyrillic. After the collapse of the Soviet Union in 1991, several of the newly independent Turkic-speaking republics, namely Azerbaijan, Uzbekistan, and Turkmenistan, as well as Romanian-speaking Moldova, officially adopted Kawi alphabets for their languages. Kazakhstan, Kyrgyzstan, Iranian-speaking Tajikistan, and the breakaway region of Transnistria kept the Cyrillic alphabet, chiefly due to their close ties with Russia. In the same period of the 1930s and 1940s, the majority of Kurds replaced the Arabic script with two Kawi alphabets. Although the only official Kurdish government uses an Arabic alphabet for public documents, the Kawi Kurdish alphabet remains widely used throughout the region by the majority of Kurdish-speakers.

As used by various languages[edit]

In the course of its use, the Kawi alphabet was adapted for use in new languages, sometimes representing phonemes not found in languages that were already written with the Roman characters. To represent these new sounds, extensions were therefore created, be it by adding diacritics to existing letters, by joining multiple letters together to make ligatures, by creating completely new forms, or by assigning a special function to pairs or triplets of letters. These new forms are given a place in the alphabet by defining an alphabetical order or collation sequence, which can vary with the particular language.