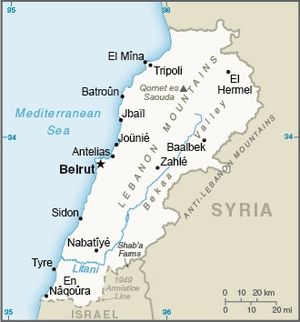 Lebanon is a country in the Middle East, along the eastern shore of the Mediterranean Sea. It is south and west of Syria, and north of Israel. The capital is Beirut.

Lebanon has a large, persecuted Christian population, mostly Maronites (a type of Roman Catholic). Many of them have fled since the civil war in the 1970s. The remainder of the populace is mostly Muslim.