Israel is a country in the Middle East. Independent since 1948, Israel is notable for being the only country in the world with a Jewish majority. The capital is Jerusalem. Its national language is Hebrew, which was revived by Jews from the ancient Hebrew language.

Israel is bounded in the west by the Mediterranean Sea and the Sinai Peninsula, in the south by the Red Sea, in the east by the Jordan River, and in the north by Syria and Lebanon.

These additional maps are presented for educational purposes and may not reflect international consensus.

This map shows Israel including the regions of Judea and Samaria.

Map of Israel including Judea and Samaria.

Israel is slightly larger than the state of New Jersey. 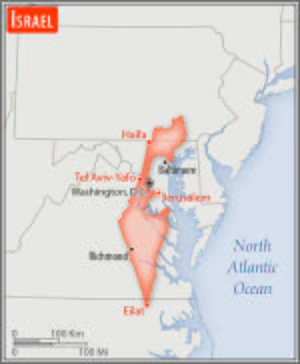 Map of Israel superimposed on the USA to illustrate scale.