Afghanistan is a country located in Central Asia. It has borders with Pakistan in the south and east, Iran in the west, Turkmenistan, Uzbekistan and Tajikistan in the north, and China in the far northeast.[1]

In early times people passed through it with animals and other goods as it connected China and India with Central Asia and the Middle East. More recently, Afghanistan has been damaged by many years of war and there not being enough jobs.

The country is around 251,826 square miles (652,230 square kilometers) in size or area. There are 30 million people in Afghanistan. There are about 3 million Afghan refugees (people who had to leave the country) who are in Pakistan and Iran for some time. Kabul, its capital, had about 3,691,400 people living in it in 2011.[2] 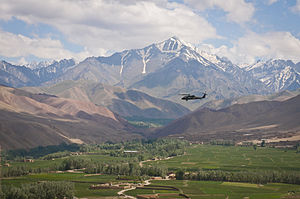 Afghanistan has many mountains. The mountains are called the Hindu Kush and Himalayas. The big mountain in Afghanistan is Mount Nowshak. There are plains (which have soil that is good for growing plants) and foothills. Part is also dry and called the Registan Desert.

Afghanistan has snow and glaciers in the mountains. Amu Darya is the big water stream, or river.

The country has a lot of a valuable stone called lapis lazuli, which was used to decorate the tomb of the Egyptian king Tutankhamun.[3]

Afghanistan has a continental climate with hot summers and cold winters. Having no water sometimes causes problems for farmers. Sandstorms happen a lot in the desert.[4]

Endangered snow leopards live in the cold Hindu Kush, but they have thick fur to stay warm. Hunters sell the soft leopard skins in the markets in the capital Kabul.

Southern Afghanistan has not many plants because it is dry. There are more plants where there is more water. Mountains have forests of pine and fir, cedar, oak, walnut, alder, and ash trees.

Afghanistan's animals are in the mountains. There are wolves, foxes, jackals, bears, and wild goats, gazelles, wild dogs, camels, and wild cats such as the snow leopard in the country. The birds are falcons, eagles and vultures. The Rhesus Macaque and the red flying squirrel are also in Afghanistan.

Many years of war, hunting, and years of no water have killed animals in Afghanistan. There used to be tigers in Afghanistan, but now there aren't any. Bears and wolves are almost gone.[3] 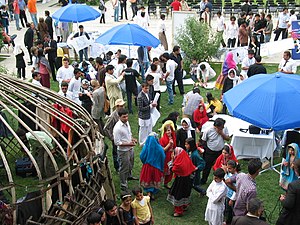 Many different cultures have moved through or invaded the land of Afghanistan. Today the people of Afghanistan, known as Afghans, have many traits passed down from these groups. The largest ethnic group (group of people considered the same in some or multiple ways) is the Pashtuns, who make up about half the Afghan people.[5] Tajiks are the second-largest ethnic group, making up about one-fifth of the population.[6] Before the 20th century, Tajiks were called Sarts[7] and some come from the Iranian peoples.[8] Most Pashtuns are also related to the Iranian peoples, and some Pashtuns and Tajiks marry each other but at the same time they are rivals, the third-largest ethnic group are the Hazaras, they are native to the Hazaristan area in central Afghanistan. The country's other ethnic groups include the Uzbek, Aimaq, Turkmen, Nuristani, Baloch, Pashayi and a few others.[3]

Dari-Persian and Pashto are the official languages of Afghanistan; bilingualism is very common.[9] Both are Indo-European languages from the Iranian languages sub-family. They are usually written with the Arabic alphabet. Uzbek and Turkmen are widely spoken in the north and Nuristani and Pashai are spoken in the east.[9] Almost all Afghans follow the religion of Islam.

Afghanistan is a largely rural country, which means that there are only few major cities and much spaced-apart land. Only about one fifth of the population lives in cities. Kabul, the capital, is the largest city. It is along the Kabul River south of the Hindu Kush range. Other cities in Afghanistan include Kandahar, Herat, Mazar-e Sharif, and Jalalabad. The rural population is made up of farmers and nomads (people who move or travel from place to place). The farmers live mainly in small villages along the rivers. The nomads live in tents while moving from place to place with their animals and belongings. Some Afghan people live in the high central mountains or the deserts in the south and southwest. Millions of people escaped from Afghanistan in order to not get involved in the wars that happened in the late 20th and early 21st centuries. Most of them lived in neighboring Pakistan and Iran.

Afghanistan is in the path of important trade routes that connect southern and eastern Asia to Europe and the Middle East. Because of this, many empire builders have decided to rule over the area. Signs that these emperors were near Afghanistan still exist in many parts of the country.[10] Afghanistan is near what used to be the Silk Road, so it has many cultures. From up to 8,000 years ago, the peoples of Afghanistan helped develop (create) major world religions, traded and exchanged many products, and sometimes controlled politics and culture in Asia.[11]

Alexander the Great invaded Afghanistan in 330 BC and founded Alexandropolis, now known as Kandahar.