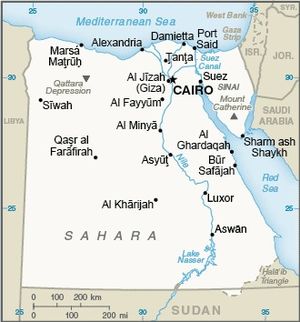 Egypt is a country in Africa, at the northeastern corner of the continent, bordering on the Mediterranean Sea. Libya is to the west, Sudan to the south, and Israel to the east

It is centered on the Nile river. It was the site of one of the world's oldest civilizations. Early rulers were Pharaohs, some of whom fought wars against the Hittites. They constructed the Pyramids, used chariots, and had Hebrew slaves. Alexander the Great conquered Egypt, founding Alexandria and leaving a Greek successor state, the Ptolemaic empire. The Romans conquered it, defeating Cleopatra. The Arabs took control in the 700s and the Arabic language replaced Egyptian.

After a long decline, it was briefly ruled by the French under Napoleon; this period generated an interest in archaeology. It was ruled by the British in the early 20th century, then became independent. Several losing wars against Israel were fought, then Egypt became one of the first Arab countries to make a formal peace with Israel.

The Suez Canal is in Egypt.