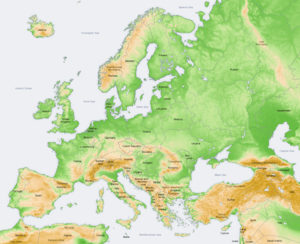 Europe is a continent in the Northern Hemisphere. There are over 700 million humans that live there.

In the last five hundred years Europe developed an advanced civilization that made it a world leader in technology, finance, trade, and exploration. European nation-states at one time controlled most of the land on the planet, and achieved hegemony at sea. In the early 20th century, Europeans engaged in two disastrous world wars, causing enormous economic and human losses, and leading to a general decline in their culture and world standing.

The majority of Europeans are Christians, with Protestants generally being in the north, Roman Catholics in the south, and Eastern Orthodox in the east. There are pockets of Muslims in Albania and Turkey, and expanding numbers in all the other countries. There used to be a large Jewish presence in eastern Europe. Most of them were killed during World War II, and many of the remainder fled to Israel or the United States soon after.

Some of the countries there are as follows:

The term is also used loosely to mean the European Union, although not all European countries are in the Union.