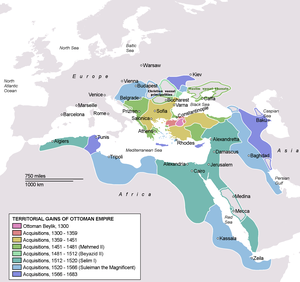 Ottoman Empire at its greatest extent in 1683

The Ottoman Empire is one of the most important empires in the history of Europe and the Middle East.

It started in Asia Minor in the late 13th century; its first recognised ruler was Sultan Osman I (1281-1324). Under his successor, Orhan (1324-60), its armies invaded Europe in 1345. It conquered Constantinople in 1453 and in the following decades occupied large parts of south-east Europe and North Africa.

The Empire's peak was under Suleyman I (1520-1566). After that, it declined under pressure from expanding European powers, and became known as the "sick man of Europe". Russia fought a series of wars against the Ottomans and took territory in the Caucasus. Greece and other Balkan states emerged in the 19th and 20th centuries. The last straw was when it sided with the Central Powers in World War I and it collapsed in 1918.

During World War I, the Ottomans organized and carried out a genocide against the Armenian minority living within their empire. Over one million Armenians were killed, mainly through massacres or by being marched out into the desert in Syria.

Australia and New Zealand fought in the Gallipoli Peninsula, now part of Turkey, during World War I. It was a conflict which many in those countries consider to be formative to their national experience.