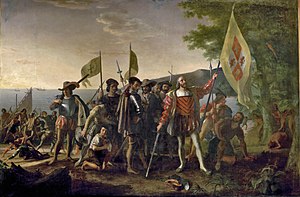 He was most likely born in Genoa between August 25 and October 31, 1451. He was probably of Italian descent and his name was originally Cristoforo Colombo. He changed it to Christovão Colom while living in Portugal (the date he moved there is unclear, but certainly by 1477) and Cristóbal Colón after moving to Spain in 1485.

The conquest of Constantinople by the Ottoman Empire in 1453 closed a key trade route from Europe to the east. While European merchants could still buy Asian goods from Muslim intermediaries, they wanted a sea route to Asia that would bypass the Middle East. The first nation to find such a route would become very wealthy by monopolising the highly profitable Asian trade.

In 1491, Columbus approached the King and Queen of Spain with a proposal to reach the Far East by sailing westwards across the Atlantic Ocean. He and they knew that the world was round, so it was theoretically possible. The only issue was how long the journey was. Columbus used the lowest current estimate of the size of the world and the highest estimate of the length of the journey going eastwards to argue that the westward route could not be very long.

Eventually, the King and Queen agreed, and Columbus set sail on 3 August 1492. He had three ships; about 40 men including Columbus were on the Santa María and there were 20 to 30 men each on the Pinta and Niña. After a stop at the Canary Islands, they left the known world on 6 September. They sighted land on 12 October and landed later that day. The landing site is uncertain but was somewhere in the Bahamas. Columbus, thinking that this was what is now called the East Indies, called the natives "Indians". After further explorations, Columbus returned to Spain, arriving on 15 March 1493. The King gave him a very warm welcome, and granted him the title of "Admiral of the Ocean Seas".

He made three further voyages across the Atlantic between 1493 and 1504. He always believed that he had reached the lands that Marco Polo had visited at the end of the 13th century and that eventually a passage would be found to China.

He retired to Valladolid where he died, after several months' illness, on 20 May 1506. He was buried in Valladolid, but in 1509 his son Diego moved his body to the monastery of Las Cuevas in Sevilla. It was then moved to the Americas in the middle of the 16th century, first to Santo Domingo and then, in 1795, to Havana, Cuba. It is said that it was taken back to Spain in 1899 and buried in the Cathedral of Sevilla, but this is disputed.

Columbus Day is an annual holiday named in his honor.

The dominant and most likely theory about Colombus' origin is that he was born in Genoa. However there are alternate theories. A DNA study is currently underway to find out more about him.

Most likely because of the available documentation.

Possible because his Spanish was better than his Italian..

Speculation exists that Columbus may have been from a Jewish family that converted to Christianity. At the time he lived, Jews were being violently persecuted in Spain, and even Jews who converted to Christianity, called conversos, were also persecuted. Many of his crew were conversos, as were some of his friends and benefactors in Spain. In correspondence with his son, Columbus would print two hebrew letters in the upper right corner. Simon Wiesenthal wrote a book about this theory.