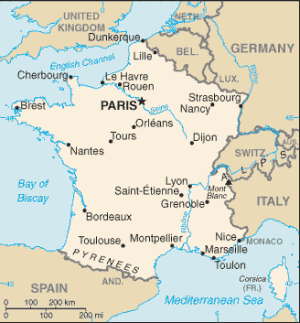 France is a country in western Europe. The capital and largest city is Paris. The language is French.

France is customarily regarded as approximately hexagonal. The six sides are:

The Basques have been in southwestern France for a long time.

The Gauls were there around 2500 years ago when the Greeks had settlements in the south, at places such as Marseilles, France. Later, Julius Caesar led the Romans in a successful war of conquest, capturing the Gauls' leader Vercingetorix.

As the Western Roman Empire decayed, invasions by Germanic tribes increased. Among these were the Franks.

Louis XIV, the Sun King, made France a world power.

France was dominant in Europe from the 17th through the 19th centuries, when its power was broken in the Napoleonic Wars, ending in 1815.

France fought a disastrous war against Prussia in the 1870 Franco-Prussian War.

World War I and World War II were pyrrhic victories for France, and it lost its colonial empire shortly afterwards. It fought unsuccessful wars in Indochina (Vietnam) and Algeria.

The French language is a Romance language, derived from Latin. It sounds pretty to many listeners, employing alternating vowel and consonant sounds to seem smoother than other langages. At one point it was so popular that it was the international language of diplomacy and commerce, and the term "lingua franca" persists.

Paris is a popular tourist destination and known as a center of art, fashion, and fine cuisine.

The French wear berets sometimes, and are sometimes generalized to be a little more laid back than the English and Germans, striking a harmonious balance between work and home life.